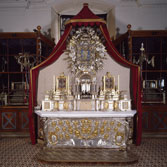 Above the two sacristies are the Mariazell Basilica treasure chambers, in which the objects brought by pilgrims to the Mother of God are kept. Through their dedication in gratitude, or the plea for help in certain matters, these objects became votive offerings. Neither the material nor artistic worth of these offerings, but rather the personal fates behind these witnesses of faith, are decisive for their qualification as 'treasure'. For this reason a great diversity of the offerings accumulated in the course of centuries.

Ascent to the treasure chambers is in the north-western tower, to the left.

The tour begins in the North Treasure Chamber.

The painted wood panelling on the entrance wall and the miracle painting above the entrance in the treasure chamber interior are reminiscent of the battle whose happy course, according to legend, brought about the giving of the most important votive offering:

After the Statue of the Virgin, the Treasure Chamber picture is the most revered miraculous image of the Virgin at Mariazell. The picture is accredited to the artist Andrea Vanni from Siena, and was painted around 1360.

The depiction, painted in tempera on wood, shows Mary with the Child Jesus on her arm. The haloes are of gilded silver plate and decorated with precious stones and pearls.

The figure is set in dark-blue enamelled silver plate with the gold heraldic lilies of the House of Anjou.

A triple string of pearls, which was donated by Luise Countess Bat-thyany on her wedding day in 1861, and a gold chain with rosette links as a cloak clasp, express the special esteem shown by the population on all sides for the painting of the Madonna.

The halo of the Child Jesus is decorated with precious stones and was donated in 1621 by Archduke Maximilian Ernst von Innerösterreich, the brother of Emperor Ferdinand II.

The picture frame of gilded silver plate and enamel shows coats of arms among acanthus leaves, and refers to Ludwig as the King of Hungary and Poland, and the House of Anjou.

The frame is probably from after 1370 by a goldsmith from Naples.

The radiant halo with cherubs of the glass-protected miracle picture was completed in 1764 for the 400th centenary celebrations of the Ludwig battle.

The entire altar, including the canopy and tabernacle, were originally of silver. The altar had to be melted down in 1794 for the French wars. The silver antependium, bearing the 37 portrait medallions of the Habsburg-Lotharingian and the royal Neapolitan family, is a reproduction of a work that Maria Theresia donated in 1769. Her daughter, Maria Carolina, Queen of Naples and Sicily, had the silver antependium reproduced in 1803 by the Viennese goldsmith Joseph Wurth as a memorial to her mother who displayed special reverence for the Queen of Grace of Mariazell.

The two large shrines flanking the altar contain the relics of the catacomb saints, Eleutherius and Cyrillus. Abbot Benedikt Pierin received them in 1650 as a gift from Pope Innocence X and he had them set with Renaissance enamel jewellery and thousands of fresh-water pearls from the treasure chamber.

Numerous silver votives, jewellery, monstrances, crosses, rosaries and baptismal coins, as well as set kidney-stones, swallowed objects and a thigh medullary pin are exhibited as votive offerings in the glass cases. The Virgin's raiment for the Statue of Mercy is kept in the drawers of the treasure chamber cupboards.

The ceiling frescoes show scenes from the Life of the Virgin: Annunciation, Presentation in the Temple, Marriage, Pentecost, Death, Coronation of the Virgin, Mary on the crescent moon and angels with symbols of the Virgin.

Above the gallery corridors hang thirty-two miracle paintings by Markus Weiß from around 1625. Each painting has an explanatory text and bears the year of the event. They depict the story behind numerous answers to prayer and miracles from the history of Mariazell.

Three further paintings date from the 18th century, whereby the artist worked within the tradition of Weiß.

The wall paintings by Giovanni Battista Colomba, showing numerous wonderful events from the Mariazell miracle books, were created before the year 1676.

On the north gallery - seen from the treasure chamber - the tour begins and passes the chronologically arranged votive pictures from the 17th to the 20th century.

In most cases, the depictions are arranged in three zones - the written explanation of the event with the date and donor's name, the picture and above it, the Mother of God.

Depictions of illnesses can be seen in the first part. The social status of the donors can be discerned by the interior and the clothing.

The number of paintings depicting a plea for recovery is naturally far greater than all other themes. These are followed by depictions of accidents and the collective vows of entire cities, such as after an earthquake in Györ (1763) or the great fire of Eisenerz (1807).

Photographs, box-framed pictures with hair or bridal veils, bottles, rosaries, cast off crutches or even earth from concentration camps were also brought as votive offerings to Mariazell.

The organ gallery contains an exhibition offering an overview of the history of pilgrimages to Mariazell and its relationship to the House of Habsburg.

The oldest votive paintings can be seen next to this.

On the south gallery votive offerings from the immediate past are exhibited. In place of individual offerings, there are often easily available mass-production wares and prints.

The south treasure chamber - dedicated to the Mother of God as the Queen of Heaven - was used until 1967 as a vestment chamber. The carved baroque glass cases from the time when the treasure chamber was founded still serve for storing vestments.

Members of the House of Habsburg donated the most gorgeous and valuable gifts to their imperial shrine, Mariazell, including magnificent goldsmith works: Emperor Ferdinand III gave a lamp of eternal light with large smoked topazes, garnets, and enamel in 1652; Emperor Leopold I gave a monstrance with matching lanterns, a peace-offering, the remarkable coconut ciborium in the form of a globe; an altar cross and six lanterns of rock crystal, a set of mass vessels and a goblet are from Emperor Charles VI. His daughter, Empress Maria Theresia, donated in 1746 a silver lantern formed of 8 hearts and bearing her name, that of her husband as well as those of their six children. In the display cases are valuable crosses, monstrances, and liturgical utensils, ivory works and the crowns for the Statue of Mercy.