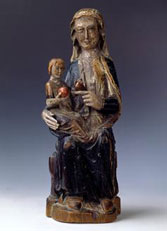 Abbot Otker from the Benedictine Monastery of Saint Lambrecht sent a monk by the name of Magnus in 1157 to the Mariazell area, which was among the monastery possessions. This monk was to attend to the spiritual welfare of the people living there. With permission from the abbot he was allowed to take with him on the long journey his Statue of the Virgin, which was carved in limewood. On the evening of December 21, a boulder blocked his path near to his destination. Magnus turned to the Mother of God for help and the boulder was split, making his way clear.

Arriving at his destination, the monk placed the statue on a tree stump and began to build a 'cell' which was to serve as both chapel and accom­modation. Maria at the Cell gave the community its name. The Statue of the Virgin became famous for its miraculous powers, and is still honoured today as the Magna Mater Austriae, the Great Mother of Austria.